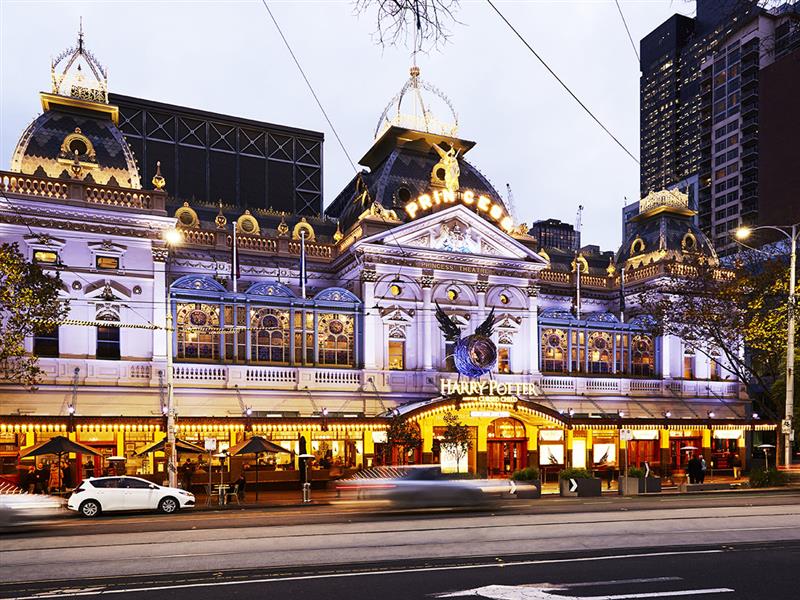 Welcome to the East End Theatre District, where Melbourne's most historic and esteemed stages bring blockbuster productions to life.

No matter if you're after big-name musicals or local comedy gigs, literary talks or live music, opera or dance, book a seat, don your glad rags, and experience the bright lights, regal facades and hushed halls of this premier arts district.

You'll find all six of the precinct's major theatres in the area bounded by Spring, Lonsdale, Flinders and Swanston Streets.

At the northern edge of the CBD, Princess Theatre has been making a splash on Spring Street since 1886. Behind an elaborate domed Victorian-era facade, its hallowed stage now hosts the hottest shows in the performance world, including big-name touring international musicals.

Built in the same year, with an equal dose of prestige and glamour, Her Majesty's Theatre on Exhibition Street hides an Art Deco auditorium and modern orchestra pit within its restored walls, perfect for opera, plays, musicals or dance. Opposite you'll find the Comedy Theatre, bringing rollicking performances to audiences since 1929.

Collins Street beckons with the restored 1929 Regent Theatre, illuminated by its elegant arched facade. Book a seat beneath the chandeliers for globally acclaimed stage productions. Across the road, the heritage-listed 1839 Athenaeum Theatre brings an exciting roll call of comedy and literary gigs to arts-avid Melbournians.

Film buffs and music lovers alike will swoon at the towering gothic facade of The Forum on Flinders Street. Touring bands and comedians take to the stage, and film lovers adore the steep auditorium opened up each year for the Melbourne International Film Festival.